*I think of actual arrival in a place not as the moment the plane touches down but as the moment I set foot on an actual street and into the hum and sway of actual locals going about their actual lives, outside of the made-for-traveler chutes of airports and subway tunnels. In London, this came, as usual, doused in a fog-like mixture of exhaustion and adrenaline. I had slept about 1.5 of the previous 22 hours, and not at all well. I got to the hotel early. The room wasn’t ready. So, some fog-ridden sight-seeing. And a lot of highly annoying selfies, with which I will torture you now.

Since I figure a lot of you will pick up on how I’m trying to make it look like I’m posting all of these braggy selfies just because I was really tired and, through little fault of my own, had lost a great deal of self-control, I’ll just go ahead and acknowledge that, yes, I probably would have taken and posted all of these anyway, even after a solid 8 hours of sleep.

*Sadly sun-starved, these Londoners. Along the banks of the Thames, near the Embankment Cafe, with sun leaking through, people had taken to the outdoors like a hungry dog to a meaty bone: Dudes in business attire playing ping-pong at a public table, so many joggers I thought maybe there was some organized race (there wasn’t), people laying on the lawn, eating lunch on benches, and one guy in a suit, earphones in, just sitting there on a bench, eyes closed, as if meditating and letting the breeze hit his face while on his lunch break, presumably loading up on some kind of spiritual fuel before getting back to the grind. 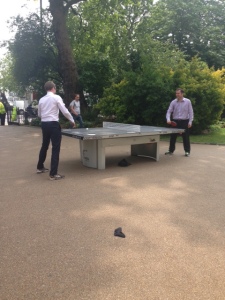 *Since I was an obvious traveler complete with backpack, bleary eyes, wrinkled shirt, and an American voice, a crepe-shop worker asked where in the States I was from. When I said, ‘Florida,’ her eyes grew wide with envy. ‘Yeah,’ I quickly qualified, ‘but it’s really hot there now.’ She didn’t seem to understand the complaint. There was sun in Florida. Lots of sun.

*Opera was coming from somewhere at the Covent Garden Market. Turns out, it was not a recording, but a live singer. An opera singer, literally right there, singing. For donations, of course – within 10 seconds of stopping and looking, I was asked for a donation — but still, a live opera singer. Singing opera, in public, live. I guess maybe I should have donated more than 60 pence? But I only caught one minute of it. 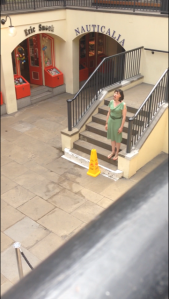 *That accent. I could sit here and listen to these people for hours. A woman asked at the crepe shop whether the bathroom was upstairs or downstairs, and was told: ‘Ya don’ go dunstazz aww oppstazz, ya jost sty awn the sime flaw ’n’ go strite.’

The British accent seems hands-down the world’s most appealing accent. But why? It’s weird, right? A Google search of ‘why the british accent is so appealing’ pulls up hits mostly on its sex appeal, and, according to an article about what is probably a very scientifically suspect poll, it is the most sexually appealing accent in the world. ‘American’ came in second.

*At intersections, I’ve found the safety reminders to ‘LOOK LEFT’ and ‘LOOK RIGHT’ to be helpful — I appreciate anything that even slightly lowers my chance of getting run over — but I can tell I’ll probably be used to it by the time and I leave and will have to re-adjust so I don’t kill myself once I get home.