On a Sunday morning a couple weeks ago, Sawyer, 2, Quinn, 5, Amanda, 19, Jen and I all piled in to a minivan rental, destined — we hoped — for Baltimore.

Idiotic or adventurous? Take your pick.

The vehicle we piled into, a black, gleaming Town & Country minivan, was actually somewhat attractive — other than, it was a minivan.

(For the record, after years of the typical, never-me attitude toward them, I’m way past my disdain for minivans. We have an Odyssey of our own — which I giddily drove home from the dealership last year — but we didn’t want to put the miles on it for this trip.)

Inside the van, though, there was no longer even a hint of elegance. There was simply a heaping, teetering mass of stuff, a study in how not to pack light, a traveler’s anti-guide:

*A suitcase for Jen and me

*A suitcase for Amanda

*A suitcase for Sawyer

*A suitcase for Quinn

*A backpack for me

*A backpack of DVDs and other kid things

*A backpack of toys

*A tote bag of more clothes

*A tote bag of extra shoes

*A Pack-n-Play makeshift crib (never used on the trip)

*A bag of snacks

*Countless other items just thrown in one at a time, practically guaranteeing that they would be hidden and all-but-undiscoverable at the time they would eventually be needed.

The trunk held only a portion of all this stuff. The rest was wedged or stacked wherever possible between and around us five humans — on seats, between seats, under seats. Luckily, Sawyer’s legs are still stubby and short, and his feet still dangle high enough that we were able to use the space under them for storage. Quinn’s legs are not really short enough for this — but unfortunately for him, we used the space under his feet for storage anyway.

The four others had already driven to Jen’s sister and brother-in-law’s house in Orlando. I met them there after flying in from a work trip.

This trip might strike some as a masochistic act. And it is. But a lot of things — like riding in elevators and on trains — make Quinn unusually nervous. (We’re working on this.) We doubted that planes would put him any more at ease.

It’s amazing how infrequently kids say ‘Are we there yet?’ when there’s a cartoon DVD playing on a screen that’s hanging from the ceiling of the van. (Our regular minivan doesn’t have a DVD player in it.) We came equipped with Curious George, Thomas the Train, and Polar Express DVDs. But they weren’t enough. Quinn quickly started complaining, ‘I already watched this!’

A stop at Wal-Mart’s $5 DVD bin, and our problem was solved. We continued on.

When covering great distances in a car, a strange tension develops.

After a few hundred miles, the world becomes a numbing-yet-painful, seemingly infinite blur of asphalt, white dashed lines, green and brown and blue road signs, and billboards advertising everything from gun shops to fashion outlets, anti-abortion messages to sex superstores. The wish to end this onward movement becomes overwhelming, even when you alternate drivers.

Above all, you just want to get the hell there.

And so to end the agony.

So, the day after spending the night in Savannah, Jen and I decided to shorten the trip by one whole day. Instead of spending the next night in Charleston or North Carolina, we would just keep on going after the kids fell asleep in their respective seats. We would go almost all the way to D.C. We got to Richmond at about midnight.

Our visits to D.C., to the homes of family, to the National Aquarium, our Inner Harbor paddle-boating, a baseball game at Camden Yards, etc. would have felt too short regardless. But when sandwiched between hours upon hours of endless driving, a few vacation days are bound to feel brutally brief. We blinked. They were gone.

As dread-filled as the drive to your destination is, the drive back home is accompanied by even more dread, since now you’re hurtling headlong back toward your grind.

But the urge to just get the hell there is just as powerful.

After my aunt and uncle’s fantastic, moving 50th anniversary party on Saturday, we set out at 9 p.m. from Arnold, Maryland, near Annapolis, some 1,029 miles and an estimated 14 hours, 56 minutes from our home.

Our plan was to stop that night between 11 pm and midnight, in the vicinity of Richmond, Va. The next day, we would drive to Charleston, S.C. and spend the night. Then we would drive the rest of the way on Monday.

We didn’t book a hotel, not knowing with certainty where we would want to stop. But since we’d probably be staying in some Podunk town nobody could possibly want to visit, we knew we wouldn’t have a problem finding a room.

‘Are you thinking what I’m thinking?’ I told Jen, kidding.

We decided to stop at a Hampton Inn in Colonial Heights, Va. There was a husband and wife ahead of me at the desk. Their voices held a sense of urgency that sent my antennae tingling. Then, my suspicion was confirmed: ‘That was our last room. We’re totally booked.’

A thought belatedly dawned on us: It was Saturday night. It was late. It was Father’s Day weekend.

Two hours beyond Richmond, we found ourselves nowhere other than Rocky Mount, N.C.. (We allowed ourselves to be taken advantage of by a DoubleTree, which as far as I can tell, costs $60 more per night than a comparable hotel simply because the lobby is bigger, and you get cookies.)

Having come this far, Jen reasoned the next morning, why not try to make it home in two days instead of three? Since nothing could be worse than what we had just experienced, it seemed entirely do-able.

The transformation was complete: This had morphed from vacation into endurance sport.

Yes, we think we will. 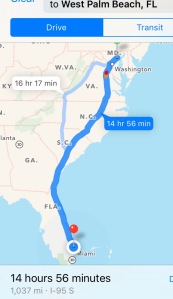