This is a video of a totally gripping history lesson/wake-up call from Yale history professor Timothy Snyder to Yale undergrads, and to all of us. The era of the ‘politics of inevitability’ — that comforting idea that democracy will, of course, win out in the end — is now over. And it was flawed from the start. And where we go next is not determined. But we have a lot of history we can learn from. Full title is ‘What Can European History Teach Us About Trump’s America?’ Watch it in chunks if you have to, but watch it. 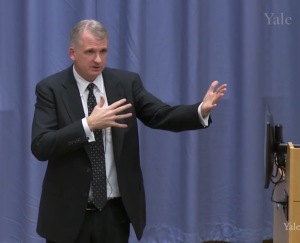 This doesn’t do his talk justice, really, but here are some of the points I found most powerful. In short, come together in ways that are neither for nor against the government, speak your mind, be extreme for good things, and widen your attention span:

‘Civil society, right? Civil society. Recognize that all the modern authoritarianisms, including the ones that are working right now, are allergic on this question of civil society. That is, groups that are neither individuals nor the government. The easiest way to rule is for it to be the government and a bunch of atoms. Right? Atoms. People who are morally and psychologically isolated. That’s an easy ruling situation. If you have civil society, that is, if you have people who are doing things together — they don’t have to be political things, right? They can be anything, really — but people doing things together that are neither for nor against the government, that creates connections. It creates professional ethics. It works against atomization, right? It creates confidence. It may create something which is extremely important, which is trust. If nobody trusts anybody, authoritarianism is really easy. If some groups trust other groups, authoritarianism becomes much harder, because if nobody trusts anybody, then, you know, then all there is left is power. If nobody trusts anybody, resistance if necessary becomes totally impossible. Because you cannot resist all by yourself, you have to be able to trust someone. You have to have that particular attitude. And civil society also creates authority, like in the sense of journalistic authority, in the sense of trusting not just individuals but maybe some institutions — that there are out there collectivities out that aren’t the state but that you might trust, for example, for information.’

‘Conformism. Watch out for conformism. And how do you know you’re being conformist? When you don’t feel awkward all the time, because people who stand out always feel awkward. Freedom feels awkward. And the moments where freedom is actually at stake — by which I mean now, you guys — are the moments when people have to feel awkward…. What’s conformism? Self-censorship is conformism, you know, when you don’t write down or say the things you might otherwise say. And self-censorship is a species of a larger problem called participatory obedience. When you obey in advance when you use your precious creativity and your hard-fought social skills. It’s normal to be creative and think about, ‘What should I do?’ But to be creative about what somebody else is going to want from you, it’s a subtle move…. It’s normal to use your social skills and think, ‘Oh, what does the other person want? I should start with them, not with me.’ That’s great. But it’s a different thing – subtly, profoundly different – to say, ‘OK, what does power want? I’m going to meet power halfway, I’m going to do it in advance…. Those are things which could be serving your own individual freedom. When those things are harnessed for obedience in advance, you are doing the work of power for it. And that is about 90 percent of how authoritarianism works, right there.’

‘Watch out for the words ‘terrorism’ and especially ‘extremism.’ I mean, I’m aware that there is such a thing as terrorism. But I’m also aware that every authoritarian regime in the history of modern politics talks about terrorism all the time. And extremism? What is that exactly? Right? So we’ve gotten used to saying terrorism and extremism — or at least hearing it, I hope you’re not saying it. Terrorism. Extremism. Terrorists and extremists. Is there an actual extremist doctrine? Right? I mean, I consider myself an extremist when it comes to the defense of the things that I think are truly important, and I would hope that others would consider that — I mean, I don’t think like, ‘Oh U.S. Constitution, you know, it’s about the same (as) Skittles.’ You know it’s not all the same to me. Right? So in that sense, because it’s not all the same to me, I am an extremist and I hope that all of you are as well. You don’t have to have the same values, but I hope that you have some, okay? I hope there’s something you feel extremely about. And if there is, then you’re an extremist. And we’re all extremists. And extremism in the defense of liberty is no vice, right? So watch out for that because extremism just ends up meaning, not in the mainstream, where the mainstream is just the thing that the leaders have just defined as being in the mainstream a day ago, or a moment ago, or in the same sentence, perhaps.’

‘It doesn’t even matter if it’s MSNBC or CNN or Fox. If you watch any of them, they break up what’s happening into such small bits, that nothing ever happens, right? Mitt Romney ties his shoelace. Mitt Romney takes a step towards restaurant in New York. Mitt Romney lifts a fork. Mitt Romney has first course. Donald Trump raises fork. Everything pixel by pixel, and so nothing never actually happens. Every story is developing. There’s no ‘Developed Story’ heading. Every story is always ‘Developing’ and never actually happens in the end. And so my point is — and I hate so sound like a cranky old historian…. We have to get away a little bit from the, ‘We can solve it that way.’ Because we can’t. The long-form journalism, right? The attention span. That’s part of some of the things that I’m talking about, especially the factuality bits. You can’t get back to factuality without longer exposure, without longer attention spans, a very self-conscious approach to print, I think.’