I was just on a flight and sat next to a guy and his son. The boy looked about 5, close to the age of my older son. As we chatted, the dad reminded me of me: thoughtful but not doting, attentive but still keen on carving time out for himself. He’d been watching a movie on an iPad while his son played a game on his iPad.

Then his son asked to color. He had dark-brown hair with bangs straight across his forehead and he reminded me of Danny from The Shining. The dad reached into a bag and dug out crayons and a coloring book. The crayons were in a zip-lock bag and the bottom had torn wide open, so in order to use the bag of crayons the boy had to keep it upside-down and zipped and take the crayons from the opening on the bottom, which was now the top. He started coloring Big Bird. Then his crayons fell off his tray.

Sigh, the dad breathed. He looked down at the floor, between his tray and his son’s, in search of the crayons.

Sigh. He looked and looked. Sigh.

‘It’s okay, it’s not your fault,’ he said, his tone more apologetic than reassuring.

Now, the dad really reminded me of me. And it made me feel a little ill.

This time, I was not the one making the Sigh, coming unhinged in the muddle of another day. I was the one hearing it, and seeing a son react to it.

Oh shit, I realized. These Sigh-s aren’t a harmless way to let off steam. They cause pain.

I must make this awful sound, this loud Sigh, to my sons at least once a day. Sometimes, five. Maybe even more.

I sit down on the couch and at that instant, my son asks for something to drink.

These loud Sigh-s are not words. But, I realized, they might as well be. Kids this age are not dumb. They know what the Sigh-s are saying: ‘You’re a pain in the ass.’

I sat there thinking: What the hell am I doing? How much pain have I caused my children with these pitiful Sigh-s?

The dad found the crayons. When the boy was finished coloring, I told him it was so good he must have taken a special class on coloring. He seemed to like that.

And I sighed. Silently. 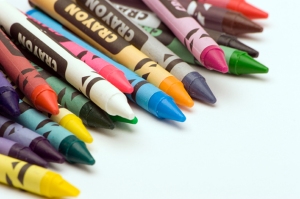