I’ve been thinking about parent overreach after I stumbled across a not-all-that-recent essay in The Times warning parents against the rabid pursuit of “passion” for their kids, that laser focus and fierce discipline that some parents think is needed to produce tennis prodigies and Ivy League admissions and recital hall social-media brags.

By the time a child rounds the corner into high school and certainly before he sets up an account with the Common App, the conventional wisdom is that he needs to have a passion that is deep, easy to articulate, well documented and makes him stand out from the crowd…. This passion, which he will either stumble upon or be led to by the caring adults in his life, must be pursued at the highest level his time and talent, and his parent’s finances, will allow. It is understood that this will offer him fulfillment and afford him and his family bragging rights that a mere dabbler would never earn.

For most children, childhood isn’t about passion, but rather about exploration. Our job as parents is to nurture that exploration, not put an end to it.

As it happens, one of my sons, 3, has gotten the baseball bug. He can spend an hour in a pretend game, practicing his swings, holding up his glove, giving pretend high-fives after hitting a pretend grand slam, which is what all of his hits are.

For a 3-year-old, he’s good. I can tell. His level swing. His stance. His timing.

Yeah, right, what a question.

But yeah, I would.

I’d also love to see them play in a rock band. Or see their artwork displayed in a museum. Or see them publish a novel.

Why? Because I like baseball, music, art and books.

Even before having kids, I silently vowed that I would not be a parent-rudder, steering him or her to one pursuit or another to satisfy my own fantasies.

This will take restraint. The 3-year-old starts on a baseball “team” — it’s really just hitting a ball off a tee and having a herd of kids pursue it like hungry wolves — next month.

What if he gets on the field and doesn’t like it? How much should I push? How will I know how much is a real lack of interest and how much is a lack of concentration that can be parented into him?

My older son, 6, already tried the baseball thing. After a few outings to the field that were full of grumbling and disinterest, we pulled the plug. I still wonder whether I let it go too easily, but I don’t think I did. He’s now in Boy Scouts, and, for now, he has much more fun tromping through the outdoors and singing silly songs.

I have gone rounds with my 20-year-old daughter, and niece — we adopted her in ’09 — for not taking on a heavier college course load while living under our roof. Is this overstepping? If she is not lazy — and she works a regular job 40 hours a week — shouldn’t she be allowed to go at her own college pace, rather than the one I imagined for her?

In the comments section on that Times piece, someone posted a poem, ‘On Children,’ written in 1923 by the Lebanese-American poet Kahlil Gibran. It’s hardly the first time it’s been posted in a parent blog, but I’d never read it. It’s a beautiful reminder that — no matter their biology, no matter how much work we do for them, no matter our love, no matter our fantasies for their lives — our children are not, in the real sense of the word, extensions of ourselves. They’re just, themselves.

Your children are not your children.
They are the sons and daughters of Life’s longing for itself.
They come through you but not from you,
And though they are with you yet they belong not to you.

You may give them your love but not your thoughts,
For they have their own thoughts.
You may house their bodies but not their souls,
For their souls dwell in the house of tomorrow,
which you cannot visit, not even in your dreams.
You may strive to be like them,
but seek not to make them like you.
For life goes not backward nor tarries with yesterday.

You are the bows from which your children
as living arrows are sent forth.
The archer sees the mark upon the path of the infinite,
and He bends you with His might
that His arrows may go swift and far.
Let your bending in the archer’s hand be for gladness;
For even as He loves the arrow that flies,
so He loves also the bow that is stable. 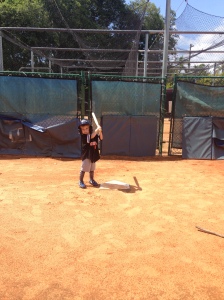